Winner of the Alison Prentice Award for women's history of the Ontario Historical Society , this biography of Victoria University's first Dean of Women charts the struggle for women's university education in the early twentieth century through the life of a "radical conservative." 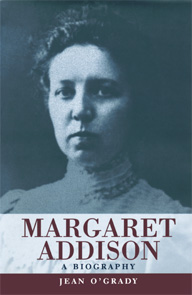 The young women were generally serious in their studies, and adhered to the “quiet hours” in the evenings when silence was to be maintained. But they could be frivolous in their free time. They emulated to some extent the highjinks of the men, particularly their odious initiation practices. Resident Ethel Kirk later recalled “'tapping' [or soaking with water] bidding fair to outrival the Deluge,” and “excited Freshmen huddled together behind locked doors, and groups of Sophomores keeping an exasperating watch in the corridors without--onions, castor oil--and Limberger cheese!” The dean tried to discourage grosser manifestations and overexcitement, while smiling on the “pure and kindly fun” of which youthful inventiveness was capable: marshmallow roasts, skits, masquerades, ghost parades, Valentine luncheons, and “baby parties,” at which apparently a little infantile regression was tolerated.

The Victoria University archives provided a fine store of documents for a biography of Margaret Addison, thanks to the preservation-minded Addison family and Margaret's own propensity to keep lists and records, at least of her professional life. I realized that her experience was significant, if not typical: that of a woman brought up in a traditional value-system, who participated in a progressive social movement (the higher education of women) without losing those values. She pioneered modern questions of co-education, the possibility of gender-neutral studies, and the nature of womanliness. Her innovations, such as student government and lectures on careers and sex education, were widely copied in other universities. I also found here rich materials to portray the experience of college women in the early years of the century.

"Vivid and compelling...a masterful job in clarifying the enigma that was Margaret Addison." - Neil Semple, author of The Lord's Dominion: The History of Canadian Methodism

“In Margaret Addison, Jean O'Grady has given us a very impressive book based on meticulous research and dealing with an essential period in Canada's intellectual history.” - John Webster Grant, Professor Emeritus, Emmanuel College of Victoria University