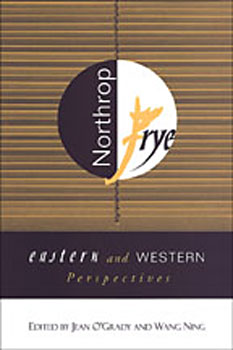 This volume, based largely on the Chinese reception of Frye, provides a double mirror: the West and its critical theory is reflected in China, and China reflects back to the West the use it has made of it. We have preserved this shape by opening with an introduction from the Chinese perspective by Wang Ning, and closing with some reflections by myself from the point of view of a Western scholar. If the Eastern scholars are in one sense the recipients as they learn more about Frye, in another sense the little band of Canadian scholars who arrived in Hoh-Hot were the learners. The sights and sounds of China, the intellectual excitement, the overwhelming hospitality--the whole strange and unlikely phenomenon of coming to Inner Mongolia to confer about Northrop Frye--these are with us still, and are still being assimilated.

A Canadian student of Frye, accustomed to a certain lack of enthusiasm for her specialty on the part of academics (though not among the general population) at home, cannot but be delighted at the interest taken in Frye at the present time in China. Delighted, but at the same time bemused: what is it about Frye that particularly appeals to such a different culture? Conference host Wu Chizhe, when questioned about this, pointed out that the interest in Frye was but part of a desire to investigate a broad range of Western thinkers--deconstructionists, cultural theorists, reception theorists, new historicists, and so on--in the new climate of openness. Undoubtedly this is true, yet Frye does seem to have an influence disproportionate to his place in the current literary scene, where his admirers are fervent but few. No other Western theorist, I believe, has been the subject of two conferences in China.

One aspect of Frye (mentioned first merely to dispose of it) that seems relevant is his predilection for numbered lists and schematic diagrams. Not only does this method give his thought a particular clarity and "graspability" missing from his more amorphous colleagues, but it seems to answer to something in the Eastern mind: examples could be found from Buddha's Four Noble Truths to the Four Modernizations of recent campaigns. The primary concerns of Words with Power, divided neatly into four groups, each with its material and spiritual aspect (as discussed in Glen Gill's essay) illustrate this kind of schematization. Obviously such pattern-making does not pretend to mirror the actual number of our needs, but must be judged by its utility in the widest sense, mnemonic, aesthetic, or symbolic. One can imagine the "four spiritual concerns" becoming more widely cited in China than in the West. Certainly it is notable that no aspect of Frye's theory, apart from the archetypes themselves, has been more accepted and applied by Chinese students than the five descending stages of the hero at the opening of the Anatomy.

There is also the fact that there are some thirty centres of Canadian studies in China. China and Canada share many aspects, such as geographical extent (though not a range of time zones, which we were surprised to learn do not exist in China), proximity to another large power, and the presence of cultural minorities. What more natural than that there should be an interest in Canada's premier literary critic and cultural theorist, the advocate of cultural diversity within a larger political unit?

Archetypal theory has a more complex relationship with Chinese culture. Both Wu and Ye note that its aspirations of universality harmonize with the Chinese tendency to favour the collective over the individual. Classical Chinese literature, as Wang Ning points out, is in one sense well suited to this approach, because of its strongly formalist nature and respect for ancestral stories. It exemplifies, more clearly than many literatures do, Frye's contention that poems are made out of other poems. But in another sense, what is notable about Chinese culture is the apparent absence of myth. Wu argues that Confucius and Confucian scholars historicized and rationalized myths; Ye suggests that the traditional attitude was one of "Don't talk about mysterious forces or worship weird gods"; graduate students at the conference, to the amazement of the Western participants, maintained that China had no "earth mother" myth. But Ye's paper also testifies to the sense of liberation with which, in scholarly circles at least, the mythical roots of Chinese culture are being rediscovered. This phenomenon helps to explain the eager reception of Frye's early work, especially Anatomy, and the embracing of "myth-archetypal criticism," to use the usual Chinese term.

It may be, in fact, that Frye's theory has entered China in too close conjunction with the work of other myth theorists such as anthropologists and Jungians for its distinctiveness to be truly appreciated: Ye's paper leaves this impression. Frye, always sensitive about being accused of taking the term "archetype" from Jung, insisted on the independence of criticism from these other disciplines. He stressed that his myths and archetypes depend neither on a collective unconscious nor on a pre-literary past; rather they are found in the structure of literature itself, and are disseminated through culture. To put it another way, the meaning of a myth for him resides not in some hypothetical original version but rather in what all the poets have made of it.

This being so, the extent of the literature surveyed becomes a crucial factor; it remains to be seen to what extent Frye's findings will be able to illuminate a literature as different as the Chinese. The question is particularly interesting in regard to the great structures he discerned: both the "circle of mythoi" or pre-generic types of comedy, romance, tragedy, and irony, and the specific genres. According to Wu, comedy and tragedy are not generally recognized literary categories in China, while a conference paper read by graduate student Liu Yongnan highlighted the lack of an epic in Chinese literature proper. So far, this generic aspect of Frye's theory has not been widely investigated in China. Even the absence of four distinct seasons in some parts of the world might call into question the universality of his schema. As the work proceeds, perhaps what will emerge is a taxonomy of Chinese literature inspired by Frye but conscious of divergences.

Another aspect of Frye's thought that is sure to be more widely studied in the East as texts become available is his social and cultural criticism. As Wang suggests, aspects of Frye can be revisioned as postmodern or postcolonial. This is particularly true of his unpublished personal writings--diaries and notebooks--which will undoubtedly lead to a complete revaluation. As these are only now making their way into print even in Canada, however, it is too early to speak much of them. But The Critical Path and The Great Code have been translated into Chinese as part of the Northrop Frye Studies series, and Words with Power is soon to be included. Along with shorter works and speeches (some of which have also been translated), they offer insights into such far-reaching topics as the role of intellectuals in society, the relation of culture to human needs, the notion of human betterment, and the very nature of mankind as a civilization-building and language-using species.

As with literature, however, a cultural divide is apparent. Frye repeatedly stressed that all perceptions are shaped by an "envelope" of language and thought-systems. The imaginative universe he explores in his last books is derived from the structure and imagery of the Bible, the chief such envelope in the West. It will be interesting to see what Chinese critics, and others of non-Bible-based societies, will find germane in these works. English-speaking scholars of Frye will benefit enormously when such studies are translated into English, helping to reveal the extent to which a radically different language and mythology alters the articulation of desire and primary need.

As early as 1947, in reviewing F.S.C. Northrop's Meeting of East and West, Frye anticipated the current debate on globalization. He noted that while internationalism was acceptable in politics and economics, cultures were more local: "There is no earthly reason why the world should be culturally federalized" (NFCL, 109). Criticism and other scholarly disciplines are more portable than the cultures they study, but still have some local specificity about them. Even in so mundane a sphere as scholarly editing, we have found during the course of producing this volume, there are differences of approach and assumption. But the fact that the volume has appeared, and that the editors are still colleagues at the end of the process, is itself a testimony to the possibility of cross-cultural dialogue. We hope that this book will further such dialogue and encourage Frye studies in an international arena, with the aim, as Frye might put it, not of uniformity but of a more valuable unity.

Reproduced with permission of the University of Toronto Press